«You should realize that Maria can get fired everyone, even me» [HR]

K. made this schema (updated with last events) for Conflict Resolution Committee at CRG.
Later the CRG Administration dishonourably implied (see below) that this Committee was allegedly called to make her follow the discipline. But that was the other way around: the Committee was called for by K. to resolve the issues with Maria Lluch-Senar's professional misconduct and incompetence.
All fairly appropriate Committee's suggestions (transfer K. to another lab, Luis Serrano supervising project as its real leader) were rejected by Luis Serrano, who was forcing K. to recognize his favorite's (i.e. Maria Lluch's) scientific authority: that was his «non-negotiable requirement» (see below) 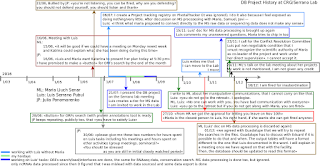 [click to enlarge]
Working ambiance at CRG, the research institution
K.: It's already more than a month when I've been doing almost nothing…
M. Lluch-Senar [chuckles, to Luis Serrano]: Luis, Katerina wants to work!
A few weeks later Maria Lluch-Senar, being unable to set a proper task for several months before that, is announced as a boss for K.. Next day after M Lluch-Senar writes to K. with cc to Luis Serrano that K. is going to be fired in 3 months (she was indeed fired in 2 months and a half).

«…this is not England or Europe, there is no honor or ethics here, just pure corruption»
[a colleague]