When I was accepting the offer from CRG, Barcelona I had no idea how closely they are connected to EMBL. I just could not imagine how this academic world is small and stinky. If I were a bit more perspicacious and familiar with so peculiar Western European academia ambiance and work ethics, if I were more prudent, I would never accept their offer. In a few months after the start of the Contract with CRG (later dishonestly broken by them) I began to feel as if I was snared. A bit later my worst foreboding just came true.

These people have very specific concepts of honesty and integrity, including research integrity. They fail to follow their own so hypocritically declared document on research misconduct: nobody even knows that such document exists. They love to harangue about ethics as if they are concerned, but this speechifying has no ground in real life whatsoever. Folks who'd decide to stand up to misconduct have no place or a person to turn to: usually they are intimidated and chose submission instead of opposing to the rogue scientists (or… they become the same).
Here is a brief story about how EMBL, in particular Iain Mattaj, deal with sexual harassment clause making sure that other non-gentlemen's misconduct is supported
— at CRG, in one way or another, I was threatened several times: «do you want that story repeated?», at the end it was «this is all right, you've already had a story with EMBL, haven't you?»
One of the finest was: «all right, they are mobbing you, but do you want the EMBL case repeated? give in!» — I almost felt like honoured with a star to the wings of my plane…

History never repeats, it reflects from the heavens to come back like a new dawn or backfire. 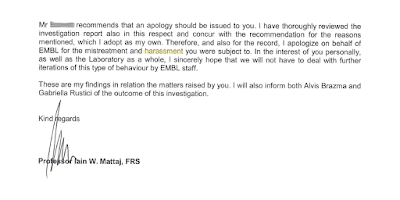