Research miscoduct and the dismissal notice, how CRG quotes the sources

Full text of the email they quote in their dismissal notice:

Subject: Re: MS data
Date: Tue, 29 Nov 2016 15:20:49 +0100
Dear Maria,
I am sorry, I cannot comment on this.
I expect you respect your colleagues and able to communicate in a calm and professional manner by email and in person.
I see you do not understand the standardization subject and I am very able to prove it to a professional commission if its needed.
I also clearly see that you are getting passively aggressive and disrespectful, you are trying to undermine me on my professional field which is ridiculous and unacceptable. I think you have to apologize.
So I am sorry, I have nothing to ask you in person.
Regards, —
Catherine

— this was reply to Maria's email quoted here-above (where our rock star Women-in-Science© got red font yelling (or blushing)).﻿ 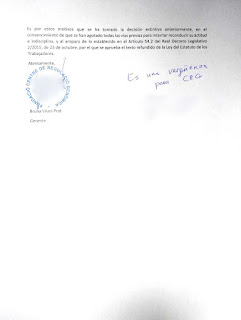 Eso es me suena a franquismo!
The actual reason for the dismissal: you «must recognize the scientific authority of Maria as co-leader of the project and work under her direct supervision alone» otherwise you are fired. No one else should witness their research misconduct and data manipulation.

Let alone senseless orders to reformat data export files just to keep you busy («new formatting did not matter, your 1st version was absolutely fine» — a colleague commented while working with that file).

This is how these cool scientists spend public money and do science now days.
They send murky messages with messy content, several files of >10Mb sent by email, «new format» © Maria Lluch Senar represented by two >100Mb Excel files with 15 spreadsheets each with hand-made copy-paste — to process all this shit into the DB.
Then they harass a professional who tries to explain how the data should have been processed. And these are just ordinary examples from a routine intellectual work process (paid by public money) of a rock star scientist with «I have many publications» — yet another shining clause of M Lluch-Senar intellectual argumentation.

This rock star scientist which is unable to create on her own a single document (without her patron) or a literate email. The same so gifted person is unable to make a tiny bit effort to grasp one simple thing: what the standards for datafile procession are. Whatever you're trying to explain her, however you try to reach for her mind — «in turn» © this person just harasses you and keeps claiming for recognition of her poor scientific authority.

Remarkably all those harassments supplemented by these wretched claims were fully supported by the top manager of the scientific institution.
Intellectual reasoning? Logical reasoning? Whatever fair damn reasoning?
Come on, bow and scrape and thank Universe, that these so great scientists could not call for the authorized science gestapo to help them out: they have only fired you because you had dared to question the authority of a really cool scientist whose favourite trip up in reply on any reasoning on the subject was just: «If you cannot do this work let us know and we will look for another way to do that».
Which was exceptionally ridiculous for this really cool scientist because «them» had no clue whatsoever about any way how their data could be processed in particular and how the scientific data are usually processed into the DB as that was not their expertise whatsoever. But surely «they» had authority to impose on you any by-products from «their» so beautiful minds.
Because. You. Cannot. Period.
— intellect, culture, work ethic here are so blatantly demonstrated that you just lose the gift of speech…

Why the data analyst has been coerced to work with concocted data and had been denied the direct contact with the data producers?
Why that so damn bright scientist who, as we're sure, is Maria Lluch, — why she was so eager to interfere between the data and a data analyst, why the hell she had to concoct that shameful hand made copy-paste Excel spreadsheets (tens megabytes), which she was unable/unwilling to put in a group repository and thus sent it by email, instead of allowing the professional to work with the data sources directly?
MS data were already processed into the DB according to the format, suggested by the project leader, Luis Serrano, Director of CRG — why this very format was refuted by his favourite and why Luis Serrano, Director of CRG had to obey M Lluch-Senar and why did he let her make dirty manipulations with data?
Why on the Earth she's been so craving for that bow and scrape?
How the hell do they spend public money then? — they hire a professional, then perform their mobbing actions against her attacking her purely on personal ground, gaslighting and slandering about her relations with other colleagues with nonsense allegations (because there is no other way to attack her) for several months and at the end just fire her after more than 9 months without giving her any credit for the job she's been doing for them.
Is it a Franquist style of modernized Spanish science or what??
And at the and — why the Staff Scientist Maria Lluch Senar and the CRG Director Luis Serrano Pubul had to lie so shamelessly?
These are fairly good questions.
And finally, how come the path of the apparent scientific misconduct was the easiest choice for them?… 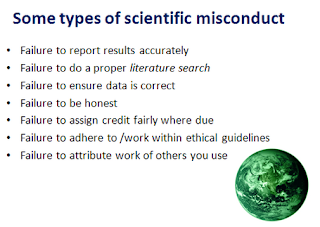 picture is taken from this article on scientific misconduct: Scientific misconduct & its effect on the medical literature
(as much as it affects biomed sciences)
Here is my twitter account: @JWapatoo where I post current updates on this case and my relaxed attitude, i.e. after me being put under pressure and stress, it is naturally personalized unlike expressed as such while I am on duty where I'm restrained by professional standing rules and contract clauses.

«You should be stressed as you are still in initial closely watched period»
© Julia Ponomarenko
(4 months after start of the contract… + «you have to satisfy Luis» — publicly, several times, in the same context: «do you care too much what people say about you?» —
nice vibrant and so motivating working atmosphere, isn't it?)
So these people don't even give a damn about the fact that a professional engineer, doing brainwork, can be only either productive or stressed.
Never both. Obviously, if quality results are to be provided.
Or, there is no need for data integrity in all this so playful scientific ambiance?
Or, these scientists — do they use their own brain for professional purposes?
P.S. CRG, represented by its Director Luis Serrano and PI Juan Valcarcel, does support scientific fraud of their PI MP Cosma — please see by these links an article of Leonid Schneider and PubPeer comments.