The most ridicule thing in the doc below is their «in turn» after the claim for recognition which they were utterly unable to get the decent way. You recognize someone's so shamefully unsatisfied scientific authority and direct supervision (instead of your former boss) and… ta-dam! — «in turn» they allow you to do your job and don't fire you.
NB: scientific authority here is an exclusive right for Maria Lluch to fuck your brain being alone with you and then to lie about you whatever shit she invents — her patron Luis Serrano would support it by any means.
You have to talk alone with her: this is what CRG Director and his favorite repeatedly claimed, whereas having Maria's ambitions together with incompetence in the subject and aggression, there is no other word than «brainfucking» for what she was doing with you tête-à-tête.
Interestingly, «Relocation of Catherine's workplace outside of Serrano's group should be considered» was firstly suggested by the Committee, but then stroke out by those claiming for recognition of the «scientific authority»… Introduced again, but no: «recognize or perish!»﻿ — see p. 6 in first version of the Committee below, p. 5 was also rejected: no collaboration, shut up! No witnesses for what we'd force you to do!
And they dragged K. from another lab to their lab what for? To make sure they could do with her whatever they'd like. No way way for relocation, claro. 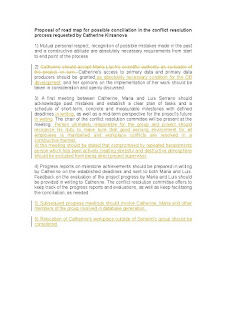 Juan Valcarcel was contacted by K. in private: she asked him to save her from bullying and she called for Conflict Resolution Committee to protect her from M Lluch Senar's bullying as it was fully supported by CRG Director and looked as a mobbing. Instead J. Valcarcel actually had joined the party: K. was fired for refusal to accept «non-negotiable requirement from Luis, i.e. that Catherine must recognize the scientific authority of Maria» — Catherine had no options than to refuse it since the behaviour of the latter looked as a sheer research misconduct.
James Sharpe (recently appointed Director of the EMBL's outstation in Barcelona) also joined to this mobbing, K. asked him for assistance as well, but on behalf of Luis Serrano he claimed the same from her: K. asked for protection, instead she's been forced to recognise scientific authority of the person she asked to protect her from! — nice, isn't it?
Still… it feels better to believe that at least James sincerely wanted to help. Yet I regret that I trusted him.

The claim of this «scientific recognition» was at very least unnecessary (though ridiculous!) unless yet another sign of the Spanish(?) corruption which at no point K. could accept as appropriate to follow. It's worth to mention that to the meeting on this so called Conflict Resolution Committee, M Lluch Senar came along accompanied by her patron — «because she's his co-leader of the project» (Juan Valcarcel) — so much ridiculous again: rather her professional qualities and culture just could not guarantee the adequate reporting.
Yet K. has been persistently forced to talk only alone with Maria.

This is first (rejected) version of the here-above mentioned document: 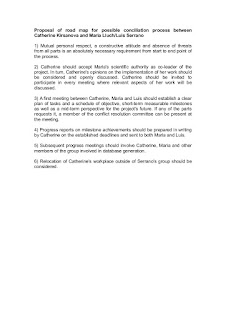 — «absence of threats from all parts» is put quite sneaky, as K. never menaced anyone, that was other way round and she just asked for stopping to threaten her (though she had to recognize fascist-style authority of whoever had threatened her).
But we can forgive this Juan Valcarcel as he's been benefiting from ERC grants perhaps á merci of Director's wife…


Luis Serrano, Coordinator of the Systems Biology Programme at the Centre for Genomic Regulation in Barcelona, Spain, and recipient of a €2 million ERC Advanced Investigator Grant for five years, said the requirement of keeping time sheets is at best a waste of time and worst an insult to the high-level researchers. “Time sheets do not make much sense, to be honest. If you want to cheat, you can always cheat,” he said. He said other grants he receives from the Spanish government and the Human Frontier Science Programme do not require time sheets [https://www.ncbi.nlm.nih.gov/pmc/articles/PMC2933871/]

— looks like here, Luis, there was that sure case when you were not cheating. You were right about yourself: secured by your position, if you want to cheat, you can always cheat. But what a shame. Your lecherous eyes work not always the way you aim them to.