Here is how Luis Serrano, CRG Director , did his best to protect reputation of his research institute by having serially lied about the reas...

Dismissal notice (the same day got, the same day fired)
Conflict Resolution Committee of the CRG was called by Katerina, not by Maria Lluch-Senar & Luis Serrano, as they so basely imply it in their dismissal notice (see below).
Also in this document they have actually just repeated their slander — see as well in the time line schema: «no one can work with you, you have bad communication with everyone» — this was said to Katerina in September as their reply on her question: why they wanted her to move in the lab if they asserted that she was so bad as a person?

They asserted this shit («no one can work with you») after she had agreed to move in the lab in July: she was told then that they wanted her to move because they needed for her expertise. Would you agree to move in the lab when you're told that you can work with no one? The last trip up was especially nice from them whereas initially M Lluch-Senar had excluded Katerina from any communications with data providers even though it was an utter requirement for the tasks which Katerina had to perform.
So she was working alone and had to figure on her own what were the data sources, and, surely, everything was fine with the other colleagues, no communication problems, just normal lab folks, who have been just helpful and nice. Otherwise, without them, the project could not move at all. But it has moved, please see its timeline: at no point that progress owed to Maria Lluch's activity, which was appallingly destructive.

Also in CRG's dismissal notice they have lied explaining the reason for the dismissal as if it was a repeated insubordination to Maria Lluch-Senar, i.e. to the favorite of Luis Serrano, CRG Director. She was not even an official boss of K., she was only set up as such after already having been set up as a project co-coordinator (exclusively by the authority of her patron). Yet right before Luis Serrano has appointed this M Lluch Senar to be a boss for K. (with no documents, no signatures of course), this Maria Lluch-Senar slandered about K. that K. could work with no one.
And immediately after announcing her slander M Lluch Senar wrote to K. that the latter would be fired anyway. Nice, isn't it?
The truth is that firstly it was repeated harassment, slander and repeated lies.﻿
Maria's misconduct and incompetence, imposed as her «scientific authority» and unaccepted by K. (and the acceptance of that was not her duty at all), K's refusal to give in to data manipulation had that cost: the dismissal. 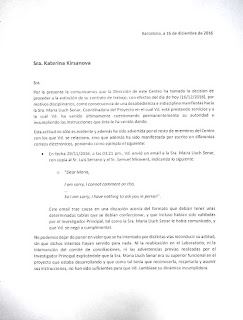 — it turned out they were too shy to speak English in this disgraceful act, K. had got it only in Spanish.
However later CRG, Barcelona gave a care to translate their threats in English (international scientific institution of excellence) — it seems for them it was really important that K. would have gotten those threats.